There are four (accessible) ROM sockets on the TEMPEST GRiDCase, all 28 pin DIL and with very little clearance up top for the bunch.[1] If you've got some EPROMs and a programmer, ROMBUILD.EXE, and MS-DOS' system files, then you're well on your way to booting from ROM rather than floppy.

Three files are required to boot MS-DOS 3.2: IO.SYS, MSDOS.SYS, and COMMAND.COM. Collectively, those three files are 68kb. Unfortunately, the largest capacity 28 pin EPROM[2], the 27512, is 64kb, ergo booting from ROM would require two EPROMs and two of the four available ROM sockets. One could, and should fill the remaining space on that second EPROM with needed programs, (FORMAT.EXE,MODE.EXE, etc.). But, given such a low memory limit, it becomes difficult to determine which programs should be considered indispensable, and therefore burned to ROM, and which should be relegated to life on a floppy.

Larger capacity ROMs were created, in a 28 pin package, but these were masked ROMs and purchasing a run of them must have been, (this might be obvious to anyone with a background in electronics manufacturing), very expensive; I've seen GRiD-branded ROMs, add-ons which I assume were not inexpensive, but with label stickers affixed that failed to obscure the EPROM's make/model.[3]

The HN62321, for obvious reasons, does not need a pin with which to switch its data lines between input/output and instead uses pin 22 for the additional address line, A16.

(128kb EPROMs exist which are pin compatible with 1M Mask ROMs (28pin type), such as the HN27C301, and if used would mean that a very simple adapter could be fashioned from a couple of IC sockets).

According to the 27C010's datasheet, when reading the EPROM, VCC = VPP = 5.25 V. Additionally, P̅G̅M̅, used to enable input during programming, should also be driven high, which is fortunate as its pin, 31, lives next to VCC.

The 27C010's pin 30, NC, can be handled in different ways. For prototyping an adapter or perhaps as a quick fix in a system that just needs a ROM replaced, pin 30 could be left alone, i.e., bent out of the way so that it doesn't enter the socket/adapter. If one was treating the EPROM as an ersatz mask ROM, the pin could even be clipped. A longer-term solution would, much like the disjunction between pins 24 and 22, require that the three pins, VPP, VCC, and P̅G̅M̅, bypass the 27C010's pin 30 and tie directly to the 28 pin socket's VCC, pin 28. 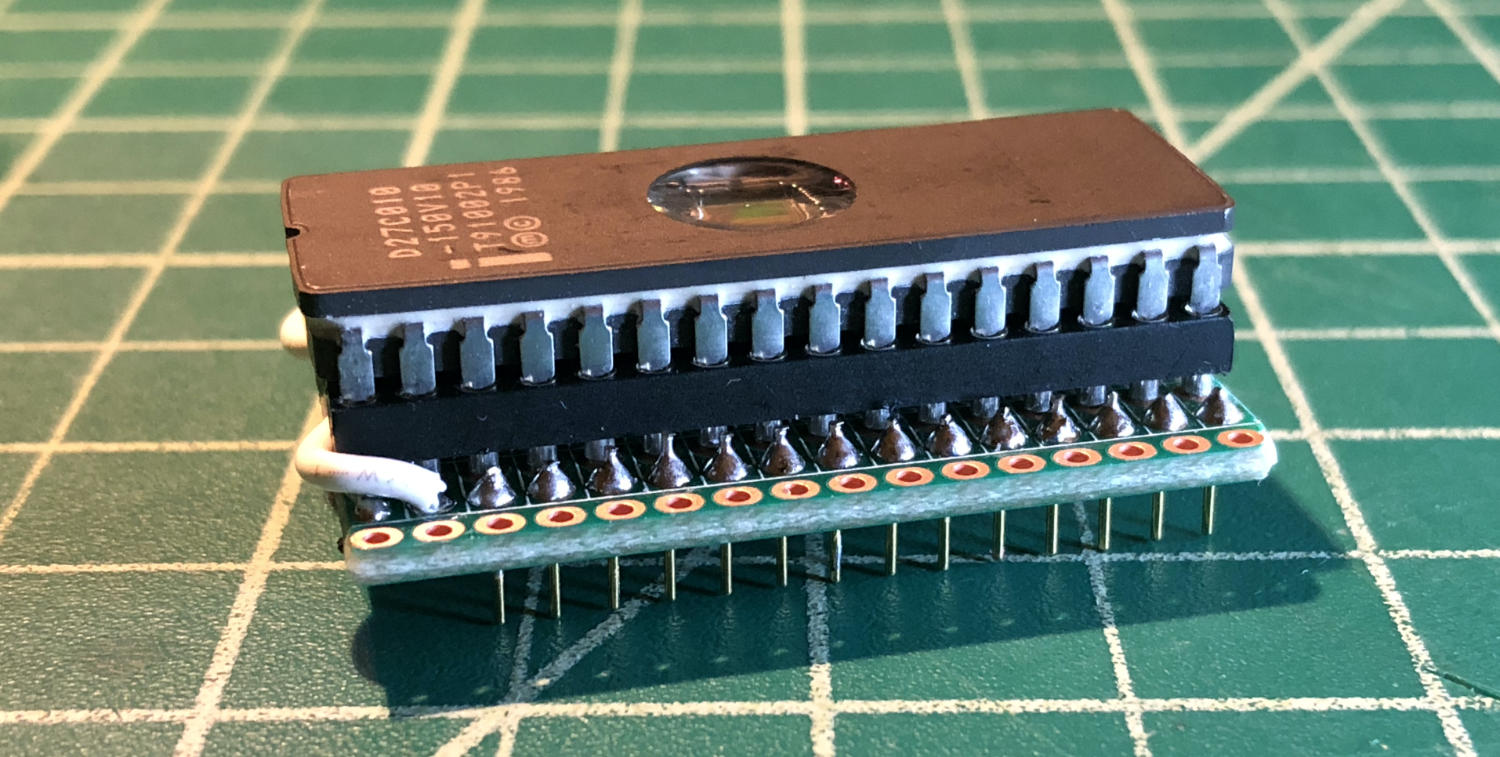 While this works (it boots MS-DOS, and much faster than two separate EPROMs, I might add), it's much too tall for the shallow ROM bed. So, the next step is figuring out something that does fit.

And, here is a listing of the hex file used in testing. It has some miscellaneous DOS files and some GRiD supplied diagnostics.