While a definitive list of the NACSIM 5100A requirements eludes me, I would have assumed the power supply to be a high-priority concern, especially considering that if a GRiD power pack is used (rather than a battery), the AC-DC converter is housed within the computer's case.

However, as TEMPEST is seemingly focused on radiation and emanations, rather than interference[1], it stands to reason that the amount of noise which enters the system is considerably less important than the amount which escapes.

In any case, whether it was to mitigate EMI or EMR, the internal modifications GRiD made to these machines to achieve TEMPEST accreditation were extensive and expensive.

Initial AC-DC conversion, i.e., mains stepped down to 16V, occurs before power enters the system. This is performed in either GRiD's own aforementioned AC Power Pack or a third-party converter, (wall-wart). If one does use the power pack, then DC enters at the terminals on the rear-facing side of the battery backplane. Otherwise, power enters at the DC inlet below the power switch and runs to the connector near the CORCOM filter.

Once DC is provided, it's routed through the backplane to the DC-DC converter, which lives between the I/O backplane and the Faraday cage which surrounds the motherboard. After the different voltages required have been regulated and isolated, the lines return through the battery board, and then on to the motherboard's power-entry module.

The TGC's power rails, if all goes well, are:

The DC-DC converter comes from Lien Engineering, a San Diego outfit which produced converters for multiple GRiDCase models.[2] Their units can be found in GRiDCase models produced for the consumer market, such as the GRiDCase 2, 3, Plus, as well as the later 15XX series.

Aside from Lien's own varying model numbers and the individual voltages regulated, I can't find any substantial differences, either in build quality, construction techniques, or component choice, between boards manufactured for the TGC and those for other GRiDCase models.

The board itself appears to be a hand-drawn design. There's a daughterboard attached with some right-angle header pins. The whole thing is housed in a three-quarters metal shell with brass spacers at each drill which I would guess are part of the design's heat dissipation.

Unfortunately, regulating the DC-DC converter's temperature by exposing as much of its surface area as possible also makes it that much more vulnerable to environmental hazards like moisture and wildlife. Fortunately for the motherboard, a by-product of its complete encapsulation within a Faraday cage is that it's protected from hazards like these.

Conversely, those subsystems living outside the cage, and therefore exposed (through the rather large ingress points presented by the battery cavity, are likely to bear the brunt of long-term storage's adverse effects). Unless the TGC's port is blocked by the presence of a battery or power pack, there's quite a large opening directly into the case's interior.

On one example, I replaced the MOSFET's because the short wires Lien soldered to each lead (I'm assuming to make it easier to line up the hole in the shell with the TO-220 packages) had disintegrated off the board. I'd bet this was a result of the storage environment as the soldermask was also peeling away in large chunks.

This is not to say that the Lien boards (like other switching power supplies) wouldn't fail for more prosaic reasons such as faulty electrolytic capacitors.

In fact, one board was magically brought back to life when I gave up troubleshooting and simply replaced every electrolytic capacitor I could find.

The power-entry module is one of the seven openings on the TGC motherboard's shielding. 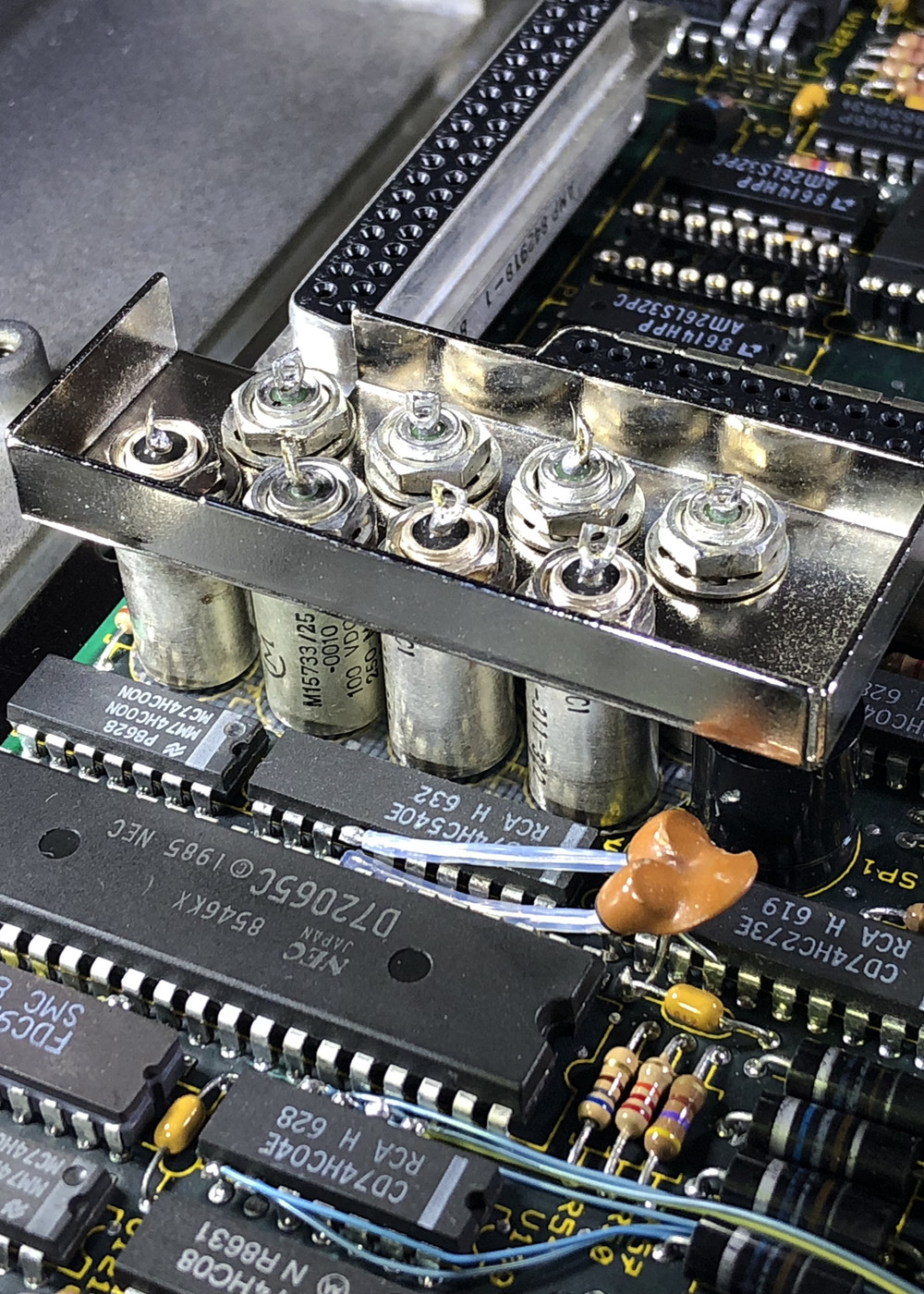 It's a phalanx of EMI filters, one for each DC line plus GND. Specifically, these are hermetically sealed case filters and the type of filter network they employ is called "Pi" or "𝝿", so named because of the circuit diagram's resemblance to the mathematical symbol.[3]

All the filters are soldered to the motherboard and threaded through a top plate which, in addition to connecting all the filters' cases, has a lip running across its edges where fingerstock is clipped. The whole thing is secured with each filter getting a lockwasher and hex nut.

As for what's going on in one of these filters, the manufacturer describes each as two discoidal capacitors with an inductor between them. A lead runs through this filter network and then each end is sealed with glass. 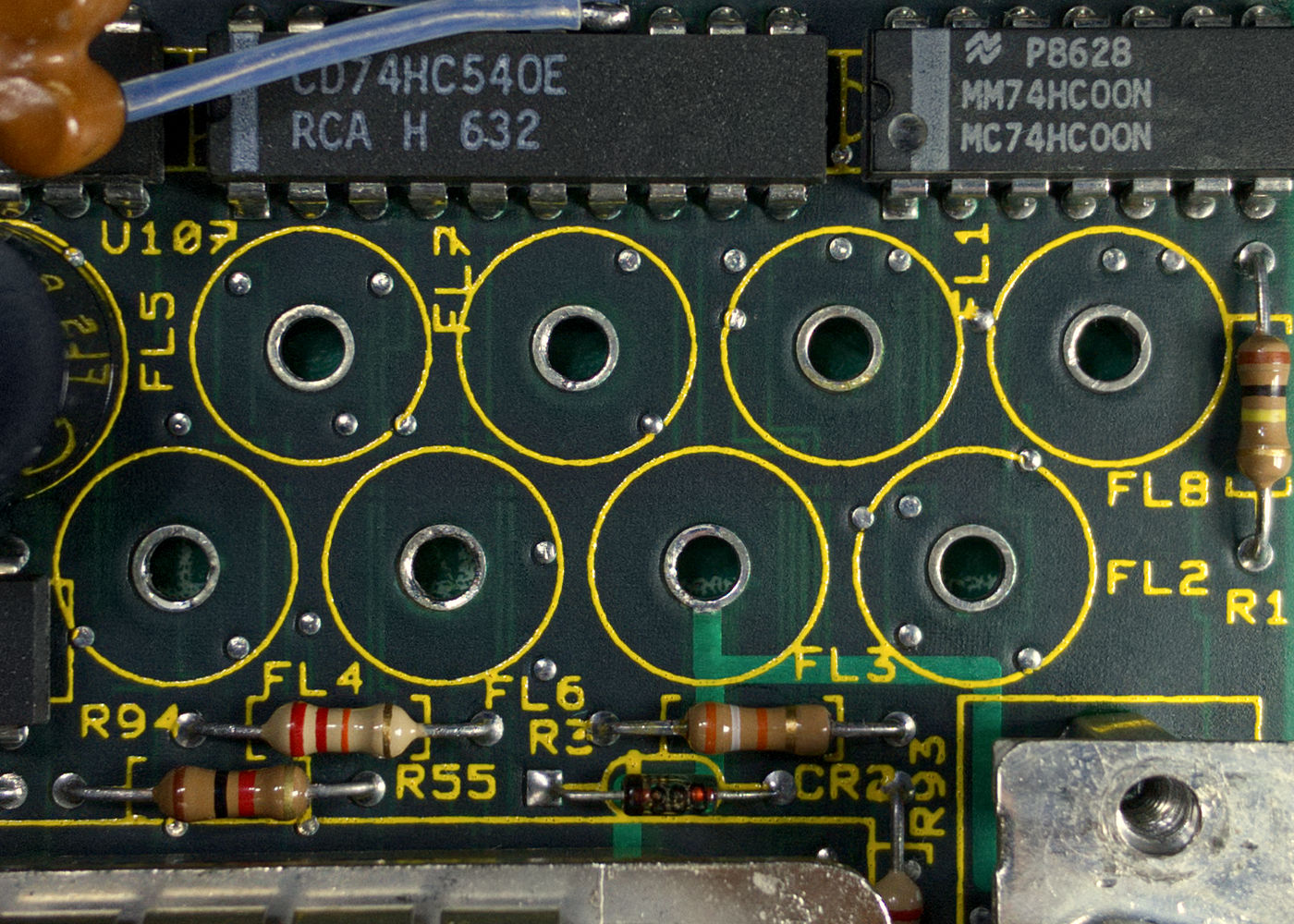